October 2, 2013 No Comments
Remember back… um… a while ago, when I said I'd be doing a series to answer those burning Italy- or travel-related questions in video form? Well, first (September) episode is above.
This is something I'll be doing every month, so before the next video launches on Oct. 15, make sure to send me your questions! Either email them to me (revealedrome@gmail.com), tweet them @revealedrome (hashtag #revealrome), or post them below here.
Thanks, and I look forward to receiving—and answering—your questions!
Continue Reading

How to Get from Ciampino Airport to Rome (Updated for 2019)

Need to get from Ciampino airport to Rome? Yeah, you could take a taxi. But unless some serious stress and/or getting ripped off immediately on landing in Italy is your thing, you probably won’t want to. Luckily, there are lots of other ways to get from Ciampino to Rome.

Better yet, these options are easy, fast… and much cheaper than taking a taxi or transfer. All of these options get you into the Termini train station; from there, you can jump on Rome’s metro (either the A or B lines), take a bus, or grab a cab (from Termini, it shouldn’t be more than €15 at the most to get to another part of the city center).

(Wondering about Uber? Don’t worry — that’s at the end too).

(Note: This information has been updated as of December 2018).

September 6, 2013 2 Comments
One of my favorite local secrets in Rome is… a keyhole. No, really. Located on up on the Aventine hill, a peek through gives you a view of not one, not two, but three sovereign states—plus, there’s a special surprise (and photo op!)
that you can see through it.
Come with me to explore the coolest keyhole in Rome in my latest video!
And don’t forget, for more great tips and tricks, check out The Revealed Rome Handbook: Tips and Tricks for Exploring the Eternal City, available for purchase on Amazon, below, or through my site here! (And, yes, the keyhole is where I grabbed the shot for the cover).
Thanks for watching!
Continue Reading

Don’t Take a Taxi at Rome’s Ciampino Airport. Here’s Why (Updated for 2019) 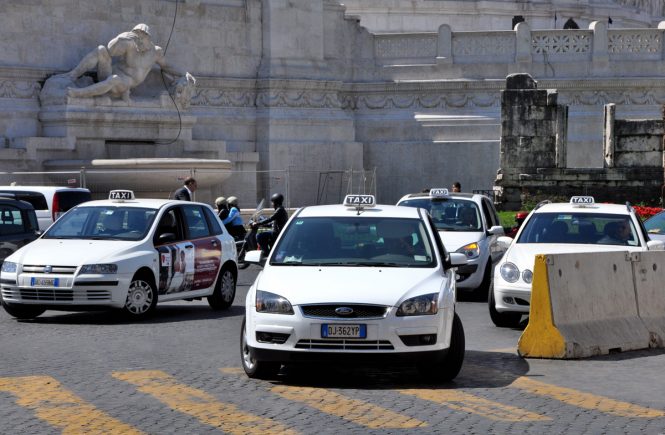 Never, ever take a taxi from the Rome airport of Ciampino.

Why? Because, it turns out, the taxi drivers at Ciampino have a racket going on — one revolving around (illegally) ripping off tourists.

Restaurants in Rome Open in August

Traditionally, much of Rome shuts down in August. (Thank Emperor Augustus for that). That’s less the case every year, with businesses trying to stay open for more of the summer, thanks to a little something known as the economic crisis.

Even so, lots of independent stores and restaurants still close for much of August. And, when it comes to dining, that includes some of the best spots.

Great events in Rome happen year-round… but some of my favorites happen to take place during the summer. So when it comes to summer in Rome, don’t worry: It’s not all about figuring out how to skip the lines and survive the heat. It’s also about some great summer events.

My favorite: hands-down, the Lungo Il Tevere summer festival. This is when the Tiber River is lined with almost a mile of shops, stalls, bars, and restaurants. And it’s open until 2am. Come mid-June, every in-the-know Roman starts heading there to meet up with friends and have a drink, dance, or even just a stroll.

Rome in Summer: Skipping the Lines, and Surviving the Crowds

Visit Rome in the summer, and you won’t just want to know where the water fountains are and to remember your SPF. You’ll want to know how to skip the lines.

June, July, and August are the tip of the top of Rome’s peak tourist season. And that means several things.

Rome in Summer: Is Rome Hot? (And How to Deal)

When it comes to Rome in summer, let’s get back to basics: what the weather in Rome in June, July, August, and September is really like… and how to deal.

In this first installment of the Rome summer guide, you’ll find out about some surprising ways to beat the heat, why Rome’s water fountains are freakin’ awesome, which of Rome’s sights have nada shade, why dressing skimpily isn’t always the answer, and—of course—what that heat is a great excuse for (hint: it comes in a cup or a cone…).

Want to survive enjoy Rome in summer, at the height of its temperatures? Read on!

What to know about summer weather in Rome (caution: heat ahead)

Rome in summer? Hot? Um, yes (at least for this New England girl). Rome’s average temperature in both June and September reaches a high of 81° F. The heat peaks in July, with a high of 88° F. And August isn’t much cooler, at 87°.

Rome in Summer: Your Ultimate Guide

Even though it’s already feeling like summer in Rome, the season officially kicks off this week. Which makes it high time for a guide to enjoying Rome… in the summertime!

Turns out, I’ve got a lot to say about Rome in summer. (Big surprise, right?). So I’ll publish this guide as a series, with posts on Rome’s best beaches, swimming pools, events, and more.

Posts in the guide to Rome in summer include…

The most idyllic island escapes near Rome

The best beaches near Rome

The best gelato in Rome

…and six other top spots for the best gelato in Rome

Restaurants in Rome open in August (the summer holiday, when most places are closed)

The best swimming pools in Rome

How to survive the crowds (and skip the lines)

How to beat the heat in Rome

May 14, 2013 No Comments
Over the next few months, I'm going to be rolling out some new Revealed Rome videos and video posts. In celebration of spring, here's the first—a short-and-sweet look at the azaleas in bloom on Rome's Spanish Steps. Enjoy!
Continue Reading
« Previous 1 2 3 4 5 … 11 Next »