Five Things I Love About the Fall in Rome

From the time I was a little girl, the fall has been my favorite season. It's the time of my birthday, of a fresh start to a new (school) year, of finally being able to cozy up in sweaters and tromp through dry leaves and smell woodsmoke in the air. While I'll always be partial to the glorious falls of New England, the autumn in Rome is pretty wonderful, too.

Here are five things I'm most excited about this fall in Rome.

There's something special about the light in Rome in autumn. Hard to show—and even harder to describe—it's a kind of golden glow that covers everything, and not just in the evening. When I first moved here, it was an October. And this light was one of the things about Rome that made me fall in love.

When it comes to fashion, the fall is when Romans are in their element… thanks to the unpredictability of the elements themselves. The cooling temperatures and flash rainstorms mean that, to keep warm and ward off such horrible made-up diseases as la cervicale, every self-respecting Italian has to bundle up with scarves and coats (and sweaters and and gloves and hats). Even if it's an unseasonably warm day. The impressive part? While I feel like an overstuffed snowman in my layers, they manage to make all of that bundling up look nothing short of stylish.

When it rains in Rome—which it starts to, like clockwork, every September—it's rarely the ongoing, trickling, depressing rain you get in, say, London. Instead, the rain pours down hard. And then, just as suddenly, stops. The result? Dramatic, Turner-worthy skies and a gloss over everything that makes the city that much more beautiful—and photogenic.

Rome's summer heat always sucks the appetite right out of me. But as temperatures drop, tucking into the simple-but-stick-to-your-ribs staples of Roman cuisine, like pasta carbonara (above, from Da Danilo)—isn't just palatable again. It's glorious.

I'm such a New England girl, it took moving to Rome for me to realize that, yes, trees change color in other places, too. In Rome, one of my favorite places to wander in autumn is the Villa Borghese, an oasis of trees, and autumn colors, in the city center.

For MSN U.K., My Video on Some Favorite Rome Spots 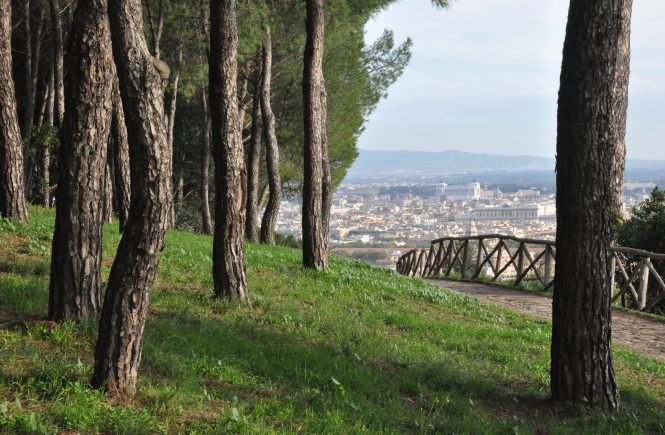