Where Famous Movies Were Filmed in Rome

“Cinecitta Shows Off,” the new exhibit at Rome’s famous movie studios, isn’t the only way to delve into Rome’s cinematic past.

The other way: Simply walking around Rome.

Many famous movies, including many of Fellini’s, were, of course, filmed here. Want to go on a cinema-themed walk? Here are some top stops. (Note: Obviously, I can’t take credit for any of these movie-still photos).

Piazza del Popolo. The piazza is one of the first clues in Tom Hanks’ Angels & Demons

Spanish Steps. This staircase is so famous, it’s shown up in lots of films. Some of the most famous, and most recent: Roman Holiday, where Hepburn enjoys her gelato, and The Talented Mr. Ripley

, where Ripley arranges for Meredith, Marge and Peter Smith-Kingsley to meet (above).

Via Margutta, near the Spanish Steps. Number 51 is where Audrey Hepburn spent that fateful night in Joe Bradley/Gregory Peck’s bed (without him — we’re talking 1953 here) in Roman Holiday. In real life, Fellini himself lived here at number 110.

Via della Stamperia, near the Trevi Fountain. Here, at number 85, is where Audrey got her (oh-so-shocking!) haircut in Roman Holiday.

Trevi Fountain. It’s the location of one of the most famous scenes in Rome movie history: Anita Ekberg wading through the waters, getting Marcello Mastroianni to come join her, in Fellini’s 1960 blockbuster La Dolce Vita

. (If you haven’t seen it, now’s your chance, above). Hepburn and Peck had a scene here, too.

Via Veneto. The slick shopping street where Ekberg and Mastroianni meet, before driving to a castle, in La Dolce Vita.

Pantheon. One of the pivotal clues for Tom Hank’s character in Angels and Demons; Hepburn and Peck come here, too.

Via dei Fori Imperiali. Here’s where Hepburn passed out on a bench in one of Roman Holiday’s first scenes, only to be roused by Peck. At the nearby Forum Hotel’s rooftop bar, The American Bar, the characters from the 1991 rom-com Only You

Piazza Navona. In that moment recreated on movie posters worldwide (although it looks like they changed the background for it… hmm), here’s where Julia Roberts sat on a bench in front of the Church of Sant’Agnese in Agone and ate her gelato in Eat, Pray, Love (below). Hepburn and Peck had a scene here. This is also the final clue, and culminating scene, in Angels and Demons. And it’s where Faith and her sister-in-law hunt for Faith’s “soul mate.”

Via dei Portoghesi. Here, at number 7, is where Julia Roberts stayed as Liz Gilbert in Eat Pray Love

. At nearby Ristorante Santa Lucia (Largo Febo 12), Liz shows off her Italian to her friends by reeling off the Italian on the menu.

Colosseum. Shots of the famous theater play a part in Roman Holiday, Eat Pray Love, Only You, and many others.

“Mouth of Truth.” Here’s where Hepburn stuck her hand, much to her fear and delight, in Roman Holiday… a scene recreated in Only You nearly 40 years later.

Castel Sant’Angelo. Where all the dancers fell into the water in Roman Holiday; the exterior was shot for Angels and Demons, too.

. And the piazza was part of that pivotal last scene in that instant classic… Eurotrip

Santa Maria in Trastevere. The church here served as a backdrop in a pivotal romantic scene between Tomei and Downey, Jr. in Only You. The nearby Trastevere restaurant, Galeassi Ristorante, is where they eat.

were filmed at this Sunday market in Trastevere.

Also: the most idyllic island escapes from Rome, 11 etiquette mistakes not to make at an Italian meal and one of the loveliest little leather shops around.

House of the Vestal Virgins, Open for Business 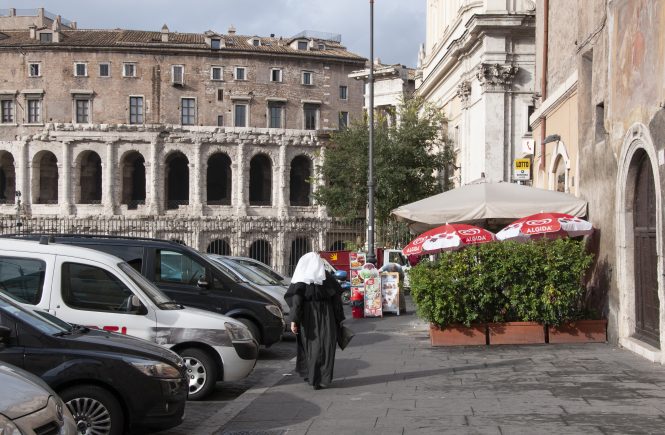 What to See in the Jewish Ghetto of Rome: My Six Favorite Sights