The short answer: because as long as people in general, and Romans in particular, have been around, we've had the urge to make our mark. That's as true of cave paintings thousands of years ago as it is of "Katie + Tom 4ever" today.

And graffiti isn't always a bad thing. Without ancient graffiti, we wouldn't have the world's oldest example of written Latin, carved into the lapis niger in the Forum in 575 B.C. We wouldn't have nearly as much idea of how literate most ancient Romans were, or of how they actually pronounced their language (both of which we can tell from graffiti's misspellings and grammatical errors).

Graffiti also gives us insights — often both humorous and humanizing — into past cultures. Actual graffiti in Pompeii, for example, includes such winning lines as "Weep, you girls. My penis has given you up. Now it penetrates men's behinds. Goodbye, wondrous femininity!" (bar/brothel of Innulus and Papilio); "Satura was here on September 3rd" (atrium of the House of Pinarius); "Atimetus got me pregnant" (House of the Vibii); "Celadus the Thracier makes the girls moan!" (gladiators' barracks); and "If anyone does not believe in Venus, they should gaze at my girlfriend" (atrium of the house of Pinarius) (and — aww!).

There's also this lovely romantic triangle, played out in inscriptions on the Bar of Prima. "Successus, a weaver, loves the innkeeper’s slave girl named Iris. She, however, does not love him. Still, he begs her to have pity on him. His rival wrote this. Goodbye." Successus' response: “Envious one, why do you get in the way.  Submit to a handsomer man and one who is being treated very wrongly and good looking.” The downtrodden Severus: “I have spoken. I have written all there is to say. You love Iris, but she does not love you."

And everyone — not just the riffraff of society — has felt the urge to make their mark on buildings and monuments, even those who, it would seem, were making more important marks in other ways. Michelangelo and Raphael scratched their names into the ruins of Nero's Domus Aurea; American settlers heading west carved inscriptions onto Signature Rock on the Oregon Trail, now a national landmark. Even Lord Byron couldn't resist, scratching his name onto the Temple of Poseidon in Attica, Greece.

Fine, you say. But why all the graffiti now?

It's true: For a modern city, Rome certainly has its fair share of spraypainted scrawls. (Although if you head to London's Brick Lane neighborhood, or other southern European cities like Athens, you'd see just as much. Not to mention places like Olinda, Brazil, where graffiti has reached the height of an art form — just check out the image at the bottom, which puts most Roman graffiti to shame). And importance of historical graffiti aside, it's not necessarily a good thing. Aesthetically, it can be an eyesore; practically, it can't be good for the old buildings. Cleaning it up, meanwhile, is frustrating and expensive: Repainting a 4-story palazzo can set you back €40,000.

And so Rome's launched a campaign against the practice. In February, the city's conservative mayor raised the fine for graffiti from a minimum €25 to €300 and mandated that anyone caught doing it will be forced to clean the graffiti up. Meanwhile, expats and Italians have started to fight the city's graffiti in volunteer squads, armed with paintbrushes and cleaning solution.

But not everyone's thrilled about these attempts. Critics point to how long graffiti has been around for, saying that preventing Romans from spray-painting their walls is like forbidding them from ever using slang. For some practitioners, meanwhile, graffiti is an art; for others, it's part of a heated competition to claim physical space in a city where actually buying property is out of most Romans' means.

And in a city where jobs are scarce and creative jobs scarcer, where architectural or artistic innovation rare (modern Maxxi museum aside), where the old palaces and ancient ruins can make the city feel more like a living museum than an evolving, organic metropolis, where the police aren't particularly notable for being energetic enforcers of the law — that all seems like the kind of place where it's little surprise that a teenager might grab a can of spray-paint and go "tagging" on a hot, lazy summer night. Nor is it surprising that most Romans, as much as many support a "graffiti offensive," both seem to understand the urge to make one's mark in spray-paint — and refuse to let it bother them.

Should I Use Rome's Public Transport? And Other Bus- and Metro-Related Questions

Top Resolutions for the Italy-Bound Traveler

Rome's Best Archaeological Museum: Have You Been?

Opera in Rome, Outdoors, at the Ancient Baths of Caracalla (Updated for 2013) 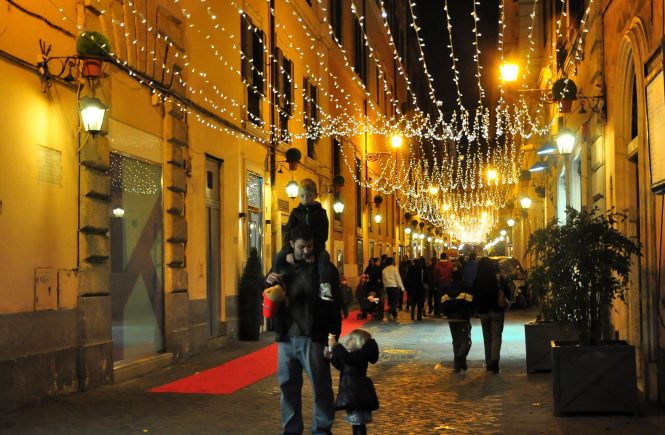 Visiting Rome at Christmas (and New Year): The Ultimate Guide (Updated for 2019)

Every Weekend in Rome’s Center, a Super-Local Food Market