Most visitors wander right past Santa Maria Sopra Minerva, intent on getting to the Pantheon, just a stone's throw away. While you can't necessarily blame them — from the outside, Santa Maria looks rather plain — they're missing out.

Because Santa Maria Sopra Minerva is one of Rome's most beautiful churches. It's a fresh experience after the dozens of Baroque and Renaissance buildings that populate the rest of Rome. And it boasts a number of treasures, from the body of St. Catherine of Siena to a (supposed) Michelangelo statue.

Built from 1280 to 1370, the church is the only Gothic church in Rome, at least in style. That's not the only different thing about it. There's also the name, which literally means "St. Mary on top of Minerva"; it got that title because it was built on top of an ancient Roman temple to Minerva. And it's here — well, in the Dominican monastery next door — that Galileo was tried for saying the earth revolved around the sun.

Inside, the interior opens up in all its pointed-arches, blue-sky-with-gold-stars Gothic glory. (It's particularly vibrant thanks to 19th century restorations). Walk all the way to the apse, and you'll see, on the left, "Christ Bearing the Cross," a marble statue started by Michelangelo in 1521. It was finished by a student of his — who was later fired from the job for his inadequacy — and it's no clear exactly how much of a hand the master really had in it. Still, pretty neat. Look out, too, for the tomb of Fra Angelico, the beatified early Renaissance painter, on the left.

Meanwhile, the altar holds something really precious: the body of St. Catherine of Siena (above). The patroness of Europe, the saint is credited with having convinced the popes to return to Rome from Avignon in 1377, and her reams of political and religious writing — and their influence — have made her one of only three female Doctors of the Church. Her body is here, not far from the nearby house where she died at the age of 33. (Her head is in Siena).

But that's not all for Santa Maria Sopra Minerva's treasures. Don't miss the Carafa Chapel to the right of the apse, which was frescoed by Filippino Lippi from 1488-1492. Look out for the dark-garbed man who seems out of place in frescoes, like the central one of the Assumption: He's St. Thomas of Aquinas.

Remember: Next time you're going to the Pantheon, stop here. You won't be disappointed.

Santa Maria Sopra Minerva is open from 7am-7pm on weekdays, and from 8am-7pm on weekends. It does close, though, from 1pm-3:30pm on weekends and holidays. It's located on Piazza della Minerva, right near the Pantheon. For a map, click here.

Where to Eat in Rome's Most Touristy Areas: The Pantheon, Colosseum and Spanish Steps

Crypta Balbi, Hidden Gem of a Museum in Rome

Yes, You Can Buy Colosseum Underground Tours Online. But It Remains Closed 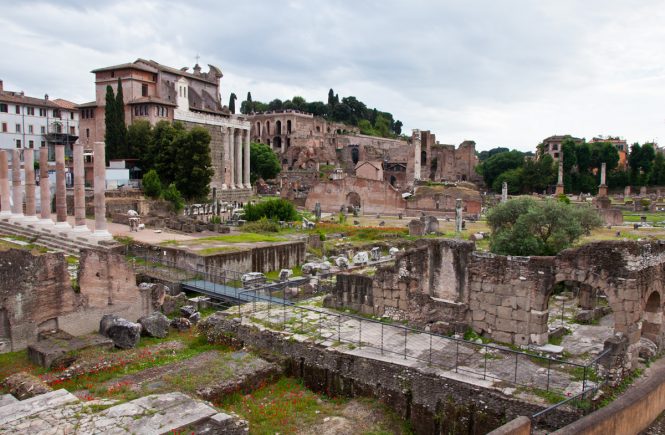