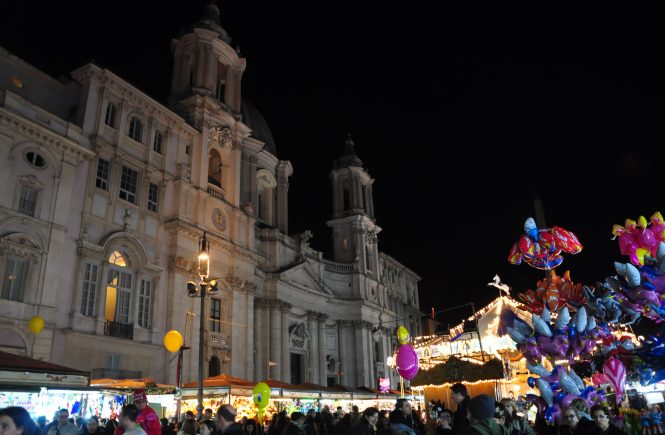 In Rome Christmas markets just aren’t as much of a thing as they are in cities elsewhere in Europe, especially further north. For years, when it came to mercatini di Natale, as Italians call them, the main event really was just the Christmas market at Piazza Navona.

Today, Piazza Navona remains the biggest Rome Christmas market, at least in the center. Every Roman (and visiting) family stops there at some point during the Christmas season. Stalls sell Christmas decorations, gifts and sweets and street performers juggle and dance, all under the gloriously-lit fountains and Church of Sant’Agnese in Agone. For atmosphere and convenience, the 100-year-old Christmas market is a good bet. And after being called off for some previous years, the market is back — it should open on 2 December 2019 and close 6 January 2020. (Of course, this being Italy, things can always change!).

But. Most of the gifts for sale there are mass-produced, made-in-China items — and a far cry from the kind of artisanal gifts you can so easily find elsewhere in Rome.

So here are some other top bets for the season. (And for more information on Rome during the holidays, don’t miss my full guide to Christmas in Rome!). Although some of these other markets are slightly out of the heart of the center, if you’re looking for a truly authentic Christmas market experience — one full of Roman families and locally-made goods — they’re worth the trip.

Every year, Rome’s Auditorium puts on a seriously spectacular Christmas event. Above all, it has plenty of performances and concerts, from gospel choirs to the Rome Orchestra — so make sure to time your visit with one of the events going on. From the center, one of the easiest ways to get to the Auditorium is to take the #910 bus, which leaves from Termini.

This market is what it says: a mini wonderland, complete with ice skating rink, shops, shows and one massive Santa Claus. Running from 20 December to 6 January, it’s at Viale Angelico, 52 in Prati.

Also: five overrated things to do in Rome (and what to do instead), and a visual visit to see Rome’s spectacular Christmas lights.

If you liked this post, you’ll love The Revealed Rome Handbook, available for purchase on Amazon or through my site here! I’m also free for one-on-one consulting sessions to help plan your Italy trip.

Roma Sparita: Eat in Trastevere, But Not With Tourists*