The Basilica of San Nicola in Carcere is way more than just another cool underground site in Rome.

That's because while the church's subterranean ruins are neat—and more on them in a moment—one of the most interesting things about San Nicola is that you don't have to go underground, or even inside, to see the church's ancient origins.

Just look closely at the exterior (pictured above*). See those columns on the left (pictured again below)? Those are from the Temple of Spes, or Hope, built all the way back in 250 B.C. The two middle columns, which blend into the current facade of the basilica? They're from the middle temple, built in honor of Juno in the 2nd century B.C. and rebuilt in 90 B.C. And the columns all the way on the right? They're the remnants of the Temple of Janus, the god of gates and beginnings, dating to a restoration by Tiberius in 17 A.D.

Unlike in other churches around Rome, these columns aren't ancient because they were brought here as part of the basilica construction. Instead, they were here first. And the church was simply built right into them.

To make that all clearer, here's an overlay of the basilica with the original temples.

The church itself probably dates back to the 6th century, but it was redone a number of times, most drastically in 1599. So even though the interior is lovely (below), the really cool part of the whole thing—at least for geeks like me—is the basement.

For a measly 2 euros (or, if you want a brief guided tour in English or Italian, 3 euros), you can descend beneath the altar, into the crypt… and then into rooms beyond. I visited for the second time today, and there was nothing like being alone with these ruins.

What's down there? The bases of the temples, of course! Remember that the ground level has risen in Rome—particularly here, next to the flood-loving Tiber River—so what was ground level in the first centuries A.D. is now below-ground. (That's the basis, of course, for all of the "underground ruins" here in Rome. Except for the catacombs, which were obviously dug to be underground to begin with). So it's here, not above, that you can see the actual podiums of the various temples.

Granted, that translates into big tufa blocks and brick walls, and not much else. So for artistic merit alone, sites like Palazzo Valentini and the Columbarium of Pomponio Hylas still win. But here's what the San Nicola in Carcere ruins have going for them: They're old. Really old. Older than any of that stuff (in fact, they're some 500 years older than the villas at Valentini). That's because they're Republican-era temples, not Imperial—and that's pretty special to see.

My favorite part is the last room, where you can see the base of the Temple of Janus on the left and that of the Temple of Juno on the right. In between, there's an ancient Roman path that would have run between the two, complete with a series of small cells, once built into the temple's axis, that likely were ancient currency exchange offices. In ancient times, after all, this was a bustling market area: During the Republic, the three temples formed the centerpiece of the Forum Horitorium, where fruits and vegetables were sold.

Ah, I do love a church with ruins. Don't you?

San Nicola in Carcere is located at Via del Teatro Marcello 46, near the Jewish Ghetto, Trastevere, and Piazza Venezia. Here's a map of the location of San Nicola in Carcere. Both the church and the ruins are open daily from 10am-5pm. Visiting the underground alone costs 2 euros; they give you a basic information sheet (there's one in English, too) and there are various English and Italian informational signs underneath, so while it's much easier to have it explained to you, you could scrape by on your own if you wanted. If you want the brief tour, in (not necessarily great) English or Italian, it's 3 euros. What a bahhh-gain!

Can't Find Your Favorite Italian Food in Rome? Here's Why 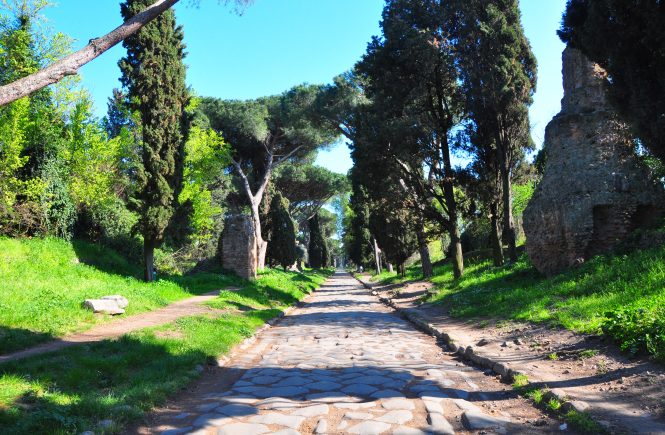 Walks of Italy Launches a Website, and More Tours