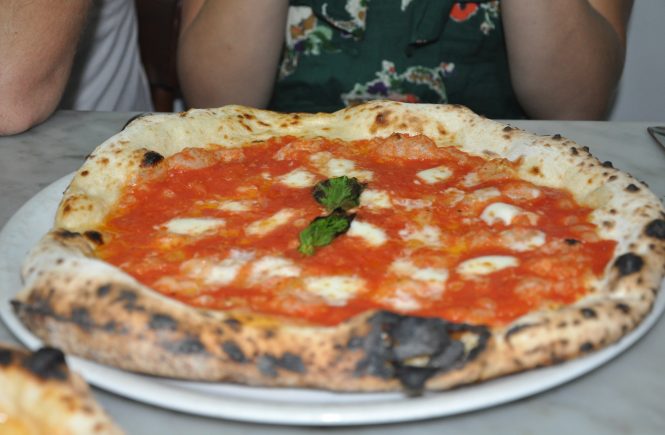 Italian American food can be delicious. It can also be extremely confusing for travelers to Italy. That’s because it’s different — often very different — from Italian food.

And that adds confusion on top of confusion, because food culture in Italy already is extraordinarily regional. So, particularly at local, non-touristy restaurants, you won’t find the same cuisine in Rome that you would in Bologna, Florence, or Venice. In Rome — or at least at Roman restaurants — you won’t find risotto (Milan and the north) or thick-crust pizza (Naples and the south), for example. (Yes, that means that pizza as good as the one in the picture above won’t exist just anywhere in Italy!).

But on top of that, there are some foods that you could comb all of Italy for and still not find. Except, of course, in the kinds of restaurants that dish up mediocre, microwaved food at inflated prices… to tourists and tourists alone.

Why? Because these foods aren’t Italian. They’re Italian-American.

(By the way, if you’re interested in learning more about how Italian food took over the world — and how Italian immigrants created some of our favorite dishes — the book Delizia!: The Epic History of the Italians and Their Food

What dishes do I mean? Here’s a list of five dishes that people expect, but will find much more easily in Chicago or New York than Italy — because they’re Italian American food, not Italian food.

Lobster fra’ diavolo was served for the first time in New York City in 1908 — and using Maine lobsters! Don’t expect to find the dish, which features lobster in a red sauce (sometimes spicy, sometimes not), while you’re in Italy.

Instead try: pasta all’arrabbiata, pasta with a Roman sauce of tomatoes and red chili peppers that make it “angry” (hence the name arrabbiata).

Nope, not Italian. What is Italian, or at least southern Italian, is melanzane alla parmigiana, or what we know (roughly) as “eggplant parm” — eggplant fried and layered with tomato sauce, mozzarella, and parmesan, then baked. Using meat instead, and throwing it on top of pasta, was an invention of Italian immigrants in the United States and Canada.

As with most Italian-American cuisine, chicken and veal parm probably came about as a way to show how much more Italian immigrants could suddenly afford in the New Country. Back home, most subsisted on cheap foods like polenta and black bread in brine. (Have you seen that at your local Olive Garden? Didn’t think so.)

After all, meat and pasta were expensive. But now, with their newfound American wealth, these same peasants and laborers could write back home and say Hey, guess what we cooked, parmigiana made with veal! And served with pasta! Thus, chicken and veal “parmesan” — and lots of other meat-and-pasta dishes besides — were born.

Instead try: If you’re in Sicily or the south, melanzane alla parmigiana.

This, of course, is the Big Daddy of all Italian-American dishes. It comes from the same idea you saw with chicken parm: two symbols of prosperity, together in one dish. This was also a dish that, as early as the 1920s, was specifically — and erroneously — marketed to Americans as Italian. (So if you thought it was authentic Italian, you’re in good company!)

Warning: In Italy, this (delicious!) dish is probably as close as you’ll get to spaghetti and meatballs.

Instead try: Hitting your meat and pasta notes separately, such as by ordering a pasta all’amatriciana (a Roman pasta with a red sauce of tomatoes and guanciale) and, if you can find them, separate polpettine di carne (meatballs).

Bent on combining lots of meat with lots of pasta? Your best bet will be a Tuscan or Umbrian ragù — but, with very little or no tomato and lots of minced-up meat, onion, celery, and carrot, it’s not the sauce you’re probably thinking of! If you’re in Bologna, definitely try pasta alla bolognese. But steel yourself here, too: It may be redder than an Umbrian ragù, but still uses lots of meat and only a little bit of tomato paste. (In other words, it ain’t like the bolognese back home).

The whole idea of smothering bread in either olive oil or butter with lots of garlic was invented in the U.S. in the 1940s, if not before. A similar version is known in Europe, too… in Romania.

Instead try: bruschetta al pomodoro, toasted bread, often rubbed with a bit of garlic (but not nearly what you see with garlic bread!), then piled with tomatoes and some extra virgin olive oil.

You’ll be hard-pressed to find cream sauces far south of Milan, including in Rome. So if you’re looking for a dish like penne alla vodka — which includes a heavy cream sauce — at a Roman trattoria, you’re already off-base. But add vodka on top of that, and many Italians will think you’re frankly off your head (unless, that is, they’re aware of the American dish).

It’s true that some histories of the dish claim it was first invented in Italy before becoming popular in the US. I’m very skeptical. Regardless, it remains difficult to find at authentic restaurants in Italy today.

Instead try: a simple pasta al pomodoro — it’s basically all the good bits of penne alla vodka (namely, the pasta and tomatoes), minus the cream and vodka. Want to pay it a little more of an homage? Finish it up with a grappa after your meal (particularly when in the north), a popular (and very strong) clear digestivo.

Rome in Summer: Your Ultimate Guide

The Foodies’ Guide to Rome, in New York Magazine