Naples, a Day Trip to the Nuttier Side of Italy

When it comes to Naples, normally-rational people become extreme. They either love the lively atmosphere, the incredible pizza, the zany streets, the faded-glory architecture. Or they hate the graffiti, the grunge, the garbage, the crime.

But here's a thought: Instead of taking everyone else's word for it, check it out for yourself.

Naples is an easy day trip from Rome, and if you're visiting Pompeii, Herculaneum or the Amalfi coast anyway, a stop there makes a lot of sense (especially because, if you're visiting Pompeii or Herculaneum, you can't miss the Naples Archaeological Museum). And — even if you wind up being one of those people in the "hate" camp — it has some gems that really can't be missed.

The city itself is sprawling and maze-like. Its history is just as, well, confusing. The short version: It was founded by Greeks in the 8th century B.C. as "Neapolis," taken by Romans, and then passed like a hot potato between barbarians, Byzantines, barbarians, Byzantines…and finally to the Normans in the 12th century. Until the 19th century, other rulers included the kingdom of Aragon, the French, Hapsburg Spain, the Austrians, Bourbon Spain, and the Napoleons. (Under the Bourbons, Naples became Europe's largest city — second only to Paris). Finally, in 1861, Naples was made part of unified Italy.

As if that weren't enough to make the city's layout, and its culture, somewhat baffling to outsiders, you then have to consider all the problems it's faced. It was the most-bombed Italian city in World War II. Today, it's home to Italy's cruelest and most powerful Mafia organizations, a huge trash-collection problem that means bags of garbage continue to heap the streets, and some of the highest unemployment in Italy.

But it's also home to things like, I don't know, not one, but two different medieval castles — Castel Nuovo and Castel Sant'Elmo. Or the oldest baptistery in the entire western world, a 4th-century building decorated with 5th-century mosaics, the Baptistery of San Giovanni in Fonte. Or Caravaggio's famous Seven Acts of Mercy, located in Pio Monte della Misericordia — among Caravaggio's other works in Naples. Or the Cappella Sansevero, with its famous and extraordinary sculpture of a veiled, dead Christ. Or this 19th-century arcade, the Galleria Umberto I (below), built to look like the famous gallery in Milan.

Then there's the National Archaeological Museum. I can't stress it strongly enough: Even with many of the wings closed to renovations, this is a must-see. It's where all that stuff from Pompeii and Herculaneum actually wound up.Here's where you'll find dozens of incredibly-preserved ancient Roman frescoes (like the one below), everyday items like vases and tableware, and ancient statues that make the Vatican's collection look like a cheap souvenir shop, including the incredible Farnese Hercules and Farnese Bull taken from the Baths of Caracalla.

If you have time, you also should make it up to the Palazzo Reale di Capodimonte. Once Bourbon King Charles III's royal palace, it now houses a world-class museum — one rivaled by few other art collections in Italy. It includes masterpieces by Artemesia Gentileschi, Brueghel, Botticelli, Caravaggio, Perugino, Pinturicchio, and Titian… among many others.

Then there are all the aspects of Naples that don't fit so cleanly into the guidebooks. The atmosphere. The maze-like streets. The young people congregating at coffee bars and bookstores in the university quarter. The shock you'll get the first time you see an entire family of four crammed onto a scooter, all without helmets, gunning it in the direction of an oncoming car.

And we haven't even gotten to the pizza!

But don't worry: For that, I think a picture alone will suffice.

So: You might be a Naples-lover or a Naples-hater. But until you go, you'll have no idea.

The easiest way to get there is to take a train from Rome Termini to the central Naples station. The 1hr, 10 mins train costs €44 one way; the 2hr, 5 min train costs €22. Check Trenitalia for times and fares.

The Week of Free Museums Across Italy… Is Here! 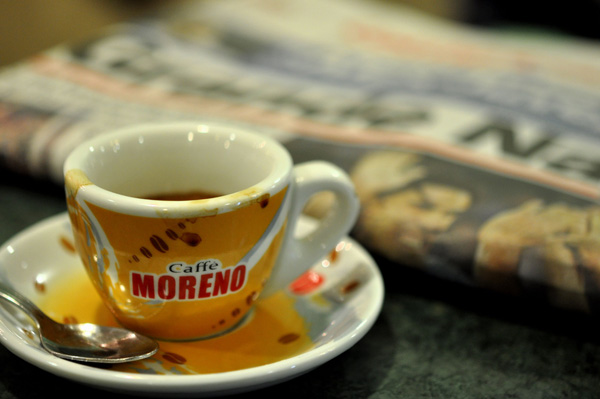 Gifts with a Conscience: Spotlight on Libera Terra