If you saw a dish like this one (the colors! the presentation!) while dining in Rome, you might assume it comes from one of Rome's Best Restaurants—you know, the places where "Best Restaurant" comes in caps, like La Pergola or Il Pagliaccio. At the very least, you might assume a meal at said restaurant would set you back a pretty penny.

You'd be even more convinced of this after taking a bite. Super-fresh, perfectly roasted octopus on a black bean sauce, adorned with a slice of celery gelatin (yes, really). And that's just the antipasto.

Located near Porta Portese (would you look at that… you can get there on the #3 bus!), Osteria Fernanda is a small but elegant space, contemporary with just the right "old Rome" touches (brick archways, wooden floors). If you can, reserve a table upstairs (shown above)—the tables downstairs are a little close together.

From the start, the service was impeccable. I was there with a visiting Scottish friend and her mother, and speaking with them in English; we were the only English-speakers in the place. But we were treated with the same courtesy and respect as the tables of Italians around us. (After more experiences than I can count, especially in Rome's centro storico, where the polar opposite is true, it's admittedly sad that this is worth mentioning). The owner, who took our orders, was polite, helpful, and, yes, spoke English.

But the food is where things really got going. First came a delicious amuse–bouche, one of those little complimentary "extras" that are rare at any but the most expensive Rome restaurants. The antipasti were perfect: the octopus (above) was delicious, although the second antipasto we ordered, an "escalope of foie gras, Szechuan pepper gelato, lemon puree and crushed nuts," blew my mind (below). Hot and cold, melt-in-your-mouth soft and crunchy, meaty and citrusy—everything was there. And it all worked.

After setting such a high bar, the primi could have been letdowns. They weren't. Although out of the three dishes were ordered—mine, acqua e farine pasta filled with Roman artichokes on cuttlefish-ink and bottarga, was creative but good—the most traditional was actually, in my opinion, the best. Yep: bucatini all'amatriciana.

It just might be the best amatriciana I've had in Rome. Ever.

Too full for the delicious-looking secondi (next time, I'm going for the beef cheek with artichoke gelatin, Jerusalem artichoke sauce and licorice), we went right for the desserts. Big surprise: They were fantastic, too. And the presentation was lovely.

Even though the prices were listed on the menu (our octopus starter was €15, the amatriciana was €14), the bill could have been almost anything. Would they charge us for the amuse–bouche? Assume we were all tourists and take advantage by adding a 15% servizio or an exaggerated pane e coperto charge? And how much were the bottles of wine that the owner had recommended, and that we hadn't double-checked the price on?

For two antipasti, three secondi, two dolci, two bottles of wine, bread, and water, the price came out to about €110. Or a little under €40 a head. The wines had been under €15, and, yes, the amuse–bouches were complimentary. Cheap? No. Incredible value? Yes. (There also are two tasting menus, one 4-course taster for €33 each and one 5-course taster for €38).

I will be back.

In the NYT: Show Explores Rome’s Role in the Renaissance

Want to Know Where to Stay in Rome? Check Out National Geographic Traveller 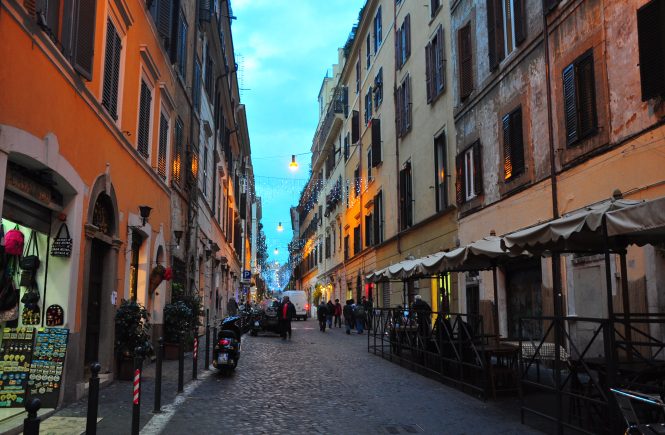