Rome’s Best Archaeological Museum: Have You Been?

If you haven’t been to Palazzo Massimo, then — even if you’ve seen the ancient statues in the Vatican and the ruins in the Forum — you haven’t seen the best of Rome’s archaeological finds.

(Note: This post was updated with current information in April 2017).

At this museum around the corner from the Termini train station, you’ll find some of Rome’s most famous bronze and marble sculptures — and then some. Treasures like ancient mosaics. Elaborately-carved sarcophagi. Incredibly-preserved frescoes taken from some of Rome’s most opulent ancient villas. Even the super-cool Fasti Praenestini, an enormous marble calendar set up in the forum of a nearby town.

First things first, though: Palazzo Massimo’s two most famous statues. I first encountered “The Boxer” in a college art history class. And lemme tell you, it’s even better in person. You can practically feel the exhaustion and melancholy emanating from the first-century B.C. bronze, slumping after his (unsuccessful?) match. Both this piece (above), and the magnificently-muscled “Prince,” were found at the Baths of Constantine in 1885.

But those aren’t the only (rightfully famous) ancient statues. The collection boasts not one, but two, ancient Roman copies of the 5th-century B.C. “Discobolus” (that super-classical athlete tossing a disc). Several beautiful Venuses. A statue of Augustus in the hooded guise of Pontifex Maximus.

And, from about 200 A.D., this fantastic sarcophagus:

The only sarcophagus I’ve ever seen approaching this one is the Alexander Sarcophagus. That one’s in Istanbul.

As much as I could go on and on about the Palazzo Massimo’s sculptures and sarcophagi, though, that’s not the real reason why you should go. The real reason is the ancient fresco collection. Not just because it’s fantastic, but because the museum has a whole section devoted to the Villa of Livia, Augustus’ wife. (Confused? Maybe it’s because I just wrote about the House of Livia and said that you can see it, and its frescoes, on Palatine Hill until March 30. But this is her other house, the one at Prima Porta).

Better yet, it’s set up more or less like the villa itself. So you can actually see how the rooms would have looked — complete not just with the frescoes on the walls, but delicate, detailed molding on the ceiling and mosaics on the floors.

One of my favorite rooms, though, is this one, taken from the ancient Villa Farnesina:

Pretty sweet. Not quite as incredible as the Naples Archaeological Museum… but almost. Since it’s right next to the Termini train station, you have no excuse not to go. I promise you won’t regret it.

Palazzo Massimo is located at Largo di Villa Peretti 1. It’s open every day but Mondays from 9am to 7:45pm; the ticket is €7 adults, €3.50 reduced, and also includes entrances into Palazzo Altemps, Crypta Balbi, and Diocletian’s Baths.

Also: the 2,000-year-old sepulchre hidden underground, the “other” Pompeii and Rome’s very own pyramid.

Looking for Glass in Rome? Forget Murano—Head to Monti 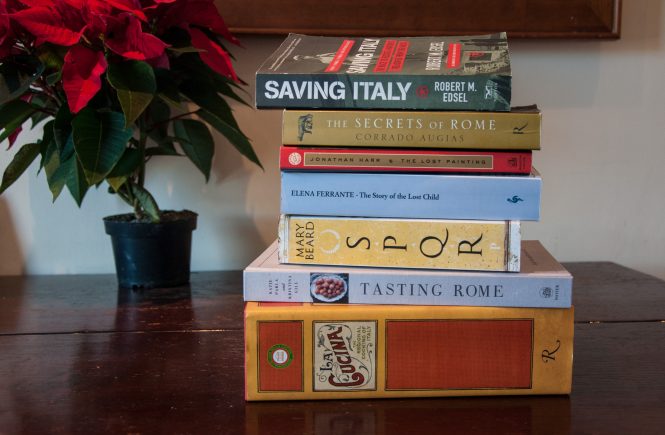